Jennifer Boyle, Chief Executive Officer commented, “The Phase 1 results clearly demonstrate that the Main Zone continues to depth and offers an immediate opportunity to increase the mineral resources at Tartan Lake with additional drilling. Our fully-funded Phase 2 drill program is currently underway and our initial target will be the South Zone where we plan to test additional interpreted structural trends near surface where there are gaps in the current drill pattern. Additional holes targeting the Main Zone are planned but drilling the near-surface mineralization at the South Zone is our initial Phase 2 target. We also plan to commence reconnaissance field work on select geophysical targets outside the mine area once the forest fire situation is under control in northern Manitoba.”

(1) Interval is measured down hole and does not reflect true width. There is insufficient information to estimate true width at this time.

Hole TLMZ21-01W1 was a wedge hole targeting the Main Zone approximately 50 metres above the previously announced TLMZ21-01 (4.15 metres averaging 9.73 g/t Au). It intersected extensive quartz-carbonate-tourmaline veining, similar to what was observed in TLMZ21-01.

TLMZ21-03 targeted the interpreted center line of the Main Zone approximately 125 metres west and 50 metres below TLMZ21-01. This was planned to be the deepest hole completed as part of the Phase One program. The hole did not flatten as planned and the hole was lost.

Wes Hanson, P. Geo., and a Director of Satori, states “The Phase One drill confirmed our model that the Main Zone continued uninterrupted to depth with grades that are consistent with historical drilling, ranging between 5 to 10 g/t. The highest single assay result returned in the Phase One program was 24.24 g/t Au over 1.15m in TLMZ21-01. We successfully extended the Main Zone over 200 metres down plunge across an interpreted 200 metre strike length. Our Phase 2 program at the South Zone will test gaps in the historical drill pattern along interpreted trends identified in the historical data, a similar approach to what was interpreted along the Main Zone. The initial drill holes are planned within 300 metres of surface.” 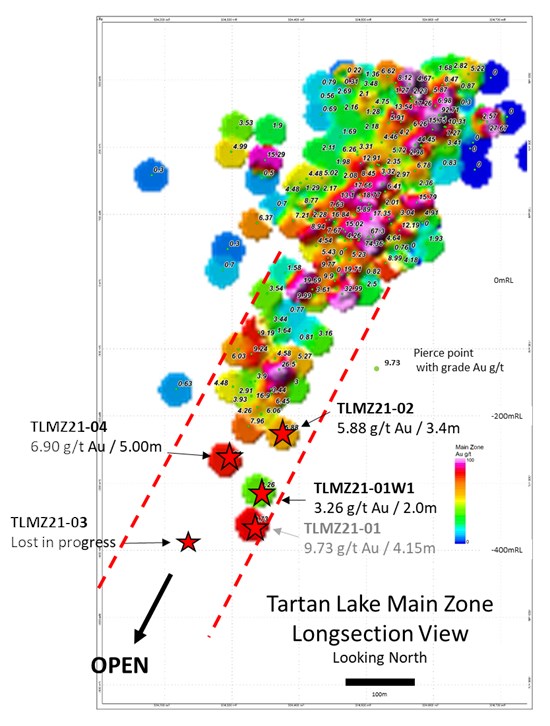 All diamond drill holes are NQ diameter (47.6 mm). Drill core is delivered to a secure logging facility at site where it is photographed, logged for geotechnical and geological data and marked up for splitting. Most samples are collected on 1.0 metre intervals, honouring litho-structural contacts with a minimum sample length of 0.3 metres and a maximum sample length of 1.5 metres. All logging, sampling and splitting is performed under the supervision of the P.Geo. managing the drill program. After logging and sample mark up, the core is split with one half of the core sent for analysis and the remaining half stored at site for future reference. Certified Reference Materials and Blanks are inserted into the sample stream at a rate of one blank and one certified standard for every twenty samples.

Samples are shipped in sealed containers to TSL Laboratories in Saskatoon, Saskatchewan for analyses. All samples are analyzed for gold using a 30 gram lead collection fire assay fusion with an atomic adsorption finish. In addition, samples are assayed using a 36 element multi-acid ICP-ES analysis method. Samples corresponding with any observed visible gold during logging are flagged for Metallic Screen analysis, as are any samples assaying greater than 5.0 g/t Au. All Quality Control results, including the laboratory’s own control samples, are evaluated before public release.

Satori is a Toronto-based mineral exploration and development company whose primary property is the past producing Tartan Lake Gold Mine Project, located in the prolific Flin Flon Greenstone Belt, Manitoba. Satori also holds a 100% interest in the New Delhi Project, an advanced polymetallic gold project in the Sudbury Mining District, Ontario.

The Tartan Lake Project (2,670 Ha.) is located approximately 12 kilometres northeast of Flin Flon, Manitoba, and includes the Tartan Lake Mine (1986-1989); which produced 36,000 ounces of gold from 250,000 tonnes of ore feed. Remaining infrastructure includes: all season access road, grid connected power supply, mill, mechanical, warehouse and office buildings, tailing impoundment and a 2,100 metre decline and developed underground mining galleries to a depth of 300 metres from surface. Gold mineralization is associated with anastomosing quartz-carbonate veins hosted in east-west striking, steeply dipping shear zones up to 30 metres in width. The veins vary from several centimetres to several metres in width and gold grades vary from 1.0 to +100 g/t. Mineralization at the mine is currently drill limited and open at depth.

THIS PRESS RELEASE IS NOT FOR DISTRIBUTION TO U.S. NEWS SERVICES OR FOR DISSEMINATION IN THE UNITED STATES.