Toronto, Ontario – March 25, 2022 – Satori Resources Inc. (TSXV: BUD) (“Satori” or the “Company”) is pleased to announce that a drilling campaign and preliminary work to complete an IP survey are underway at the Tartan Lake project, Flin Flon, Manitoba.

The Company plans to drill the Hanging Wall Zone and the Main Zone at greater depths with a drill rig that has deep-drilling capacity. The drilling equipment currently on site has depth capacity for South Zone and McFadden Zone, and allows Satori to access McFadden at this time by winter road.

Jennifer Boyle, Chief Executive Officer, states “The McFadden Zone has been on our radar for quite some time. Drilling at McFadden provides Satori with the opportunity to make a potential new discovery outside of the known Main Zone and South Zone deposits. We are following up on a historical stripped area with surface expressions of extensive quartz-carbonate-tourmaline veining within a significant shear zone, similar to what we are seeing at Main Zone and South Zone. Our recently constructed snow-packed trail system to McFadden has provided more efficient access to four (4) drill pad set-ups, which may have otherwise been more difficult during summer months without helicopter support.” 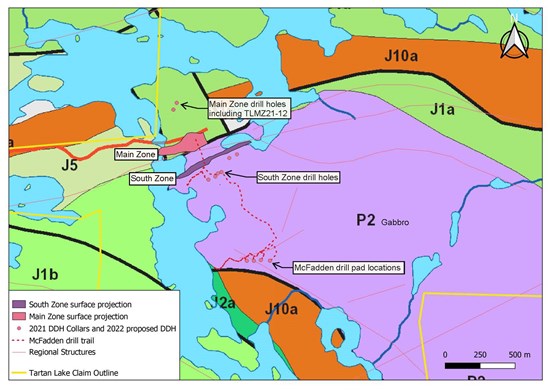 The Company further announces that it has completed the first phase of a two-phase 45 line kilometre Induced Polarization survey. The survey shows several narrow resistive zones and corresponding IP chargeability anomalies that could represent quartz veins within a sulphide enriched shear expression at McFadden.

The survey has also produced several anomalies elsewhere and has generated preliminary targets for drill testing. The grid covers the Main Zone, the South Zone, as well as nearby targets of Ruby Lake, McFadden and N229. 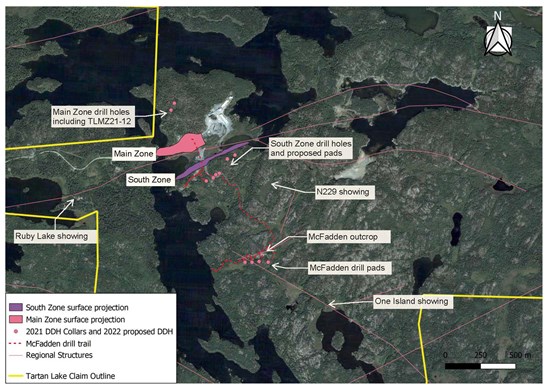 The Tartan Lake Project (2,670 Ha.) is located approximately 12 kilometres northeast of Flin Flon, Manitoba, and includes the Tartan Lake Mine (1986-1989) which produced 36,000 ounces of gold before the mine was shut down due to, in part, the price of gold falling below USD$390. Remaining infrastructure includes: an indicated resource estimate of 240,000 ounces averaging 6.32 g/t Au (see news release February 23, 2017), an all-season access road, grid connected power supply, mill, mechanical, warehouse and office buildings, tailing impoundment and a 2,100 metre decline and developed underground mining galleries to a depth of 300 metres from surface. Gold mineralization is associated with anastomosing quartz-carbonate veins hosted in east-west striking, steeply dipping shear zones up to 30 metres in width. The veins vary from several centimetres to several metres in width and gold grades vary from 1.0 to +100 g/t. Satori believes the mineral resources of the project are currently limited by drill coverage.