Toronto, Ontario – May 25, 2022 – Satori Resources Inc. (TSXV:BUD) (“Satori” or the “Company”)  is pleased to announce the completion of its 2022 Phase I drill program at Tartan Lake. A total of 10 holes (2,900 metres) was completed. Seven holes targeted the McFadden showing, an area of intense quartz-carbonate-tourmaline veining hosted in intensely sheared and deformed volcanics, approximately 1.5 kilometres south of the Main Zone.

Assays for the 2022 Phase I program are expected in June 2022. The Company is currently  planning its 2022 Phase II field program, which will: (i) test the extent of the new hanging wall zone identified in hole TLMZ21-12, intersecting 47.56 g/t Au  over 5.8 meters, within a wider interval averaging 23.76 g/t Au over 12.6 meters – (See news release dated December 6, 2021); and (ii) conduct a ground reconnaissance program to investigate surficial geology and access to the large chargeability conductor shown in the north-west portion of the recently completed IP data (See Figure 1 below).

Jennifer Boyle, Chief Executive Officer, states that “Our focus has been to increase the mineral resource at Tartan Lake with the objective of outlining the potential to host a million ounces. Our drilling to date has successfully extended both the Main and South Zone to depth, along plunge, reporting grades and interval widths that are among the best intercepts ever reported at Tartan Lake. Our next step is to demonstrate additional mineralization distal to the two known resource areas. Based on the available data, McFadden was the most advanced target, demonstrating similar lithologies to the known gold bearing areas with promising surface results. The winter IP survey identified additional untested drill targets within the claim block that we plan to systematically test as part of our continued exploration effort. The Tartan Lake mine shut down in 1989 when the price of gold fell below USD$400, leaving behind a developed ramp system to the known mineral resource. The project has never been systematically evaluated since the closure of the mine. Tartan Lake is located in the heart of the most significant VMS district in the world, where several, high grade copper- zinc-gold deposits have been discovered and mined.” 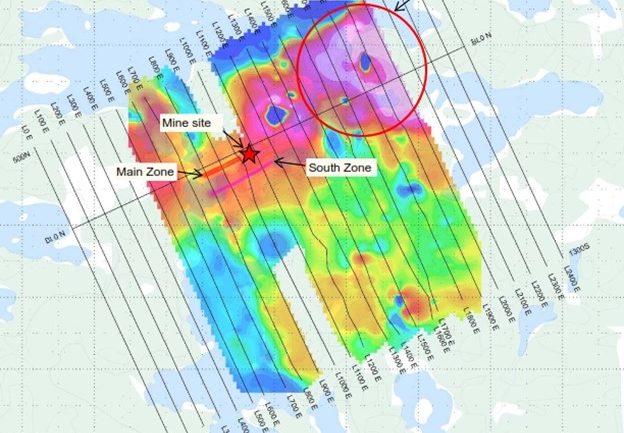 The Tartan Lake Project (2,670 Ha.) is located approximately 12 kilometres northeast of Flin Flon, Manitoba, and includes the Tartan Lake Mine (1986-1989) which produced 36,000 ounces of gold before the mine was shut down due to, in part, the price of gold falling below USD$390.  Remaining infrastructure includes: an indicated resource estimate of 240,000 ounces averaging 6.32 g/t Au (see news release February 23, 2017), an all-season access road, grid connected power supply, mill, mechanical, warehouse and office buildings, tailing impoundment and a 2,100 metre decline and developed underground mining galleries to a depth of 300 metres from surface. Gold mineralization is associated with anastomosing quartz-carbonate veins hosted in east-west striking, steeply dipping shear zones up to 30 metres in width. The veins vary from several centimetres to several metres in width and gold grades vary from 1.0 to +100 g/t. Satori believes the mineral resources of the project are currently limited by drill coverage.