Review of the geophysical and geological data is ongoing, however it has progressed sufficiently to allow the Company to begin identifying favourable drill targets for ongoing evaluation and follow up field investigation.

The Company has previously outlined its dual track of expanding its current resource at Tartan Lake, while pursuing the necessary permits to put the mine back in to production.

The focus on resource expansion has led Satori’s technical team to identify opportunities within close proximity to the existing mining infrastructure, and in addition, the recent geophysical study suggests that two other zones may provide potential expansion at the Tartan Lake mine. These zones and associated targets have seen minimal historical exploration work and are situated within the assembled claim package close to the mine.

Wes Hanson, P. Geo, and a Director of the Company states; “We are very encouraged with the observations to date which support our view that Tartan Lake offers a dual path to drive stakeholder value. This is a road accessible property, in an established, world class mining district, with considerable infrastructure in place and demonstrated potential to host anomalous gold mineralization. Historic mine production (1987-1989) averaged 5.78 g/t gold from the Main and South Zones to a depth of 300 metres from surface. The historical pre-mining mineral reserve estimate (Kilborn 1986) estimated a total reserve of 623,000 tonnes averaging 8.50 g/t Au containing 170,000 ounces of gold. Approximately 50% of that pre-mining reserve remains in place and is fully developed. Our compilation work to date strongly suggests that the mineralization remains open at depth along plunge and there is compelling evidence suggesting potential for additional discoveries outside of the resource area but within 1000 metres of the existing mine infrastructure, based on historical sampling and drilling which we continue to evaluate. We continue to review the available data and are focusing on finalizing our exploration plan and budgets in the coming weeks with a view to initiating a diamond drill program and other such exploration activities in Q1-2021; provided no additional COVID restrictions are initiated that would affect our plans.”

A review of the Main Zone, developed and mined from 1986 to 1989, suggests it remains open to depth along plunge. The host shear zone ranges in thickness from 15 to 50 metres, strikes East-West and dips steeply to the north. High grade gold mineralization associated with anastomosing quartz-carbonate veins occur within this shear zone, generally favouring the hanging wall (northern) contact. The veins range from sub-centimeter to several metres in thickness. The compilation work suggests that the main zone has a core component, with more intense quartz carbonate veining. The core extends for 150-200 metres along strike, varies from 2.0 to 10.0 metres in width and extends for 150 to 200 metres down dip. It plunges to the west at 65º and has been traced by historical drilling for over 600 metres along plunge to the west. The geometry suggests that the core component offsets to the west and north at depth and that the historic holes to the west of the Main Zone drilled over top of the target. The down plunge target area represents a compelling exploration target that is immediately accessible for diamond drilling. Eleven (11) diamond drill holes currently define the western limit of Main Zone (Ref. Figures 1,0 and 2.0). Assay results indicate the host shear zone averages 2.45 g/t Au over 12.4 metres (true width). Within the shear zone, the core mineralization returned an average grade of 6.21 g/t Au over 3.6 metres (true width) very similar to the historic mine feed grade from 1986 to 1989, originating from the upper 300 metres of the deposit 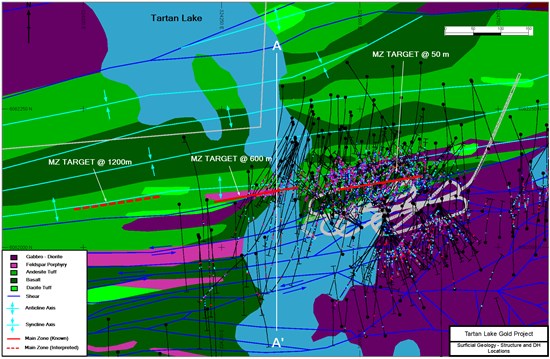 Jeremy S. Brett, MSc., P.Geo., Senior Geophysical Consultant, MPH Consulting Limited, has reviewed the historical geophysical data and has recommended additional post processing of the 2011 Geotech VTEM survey data, which is underway. The post processing will identify chargeable and resistive responses within the airborne data set which shall be used to prioritize targets for further geophysical surveys and or drilling if warranted. The airborne survey identified weak, conductive anomalies along the regional West-North-West striking shear structures that trace into the mine sequence (Ref. Figure 3.0). This regional trend remains largely unexplored to date and further processing of the airborne data could highlight areas that should be evaluated in the field.

Mr. Brett has also recommended that the Company consider a Controlled Source Audio Magnetotelluric (CSAMT) survey to evaluate the down plunge potential of the Main and South Zones at depth. An Induced Polarization (IP) survey has also been recommended to evaluate the along strike extent of the host shear zone system to the east and west of the historic mine, as well as to evaluate select target areas along the conductive anomaly highlighted by the older HLEM and VTEM surveys. 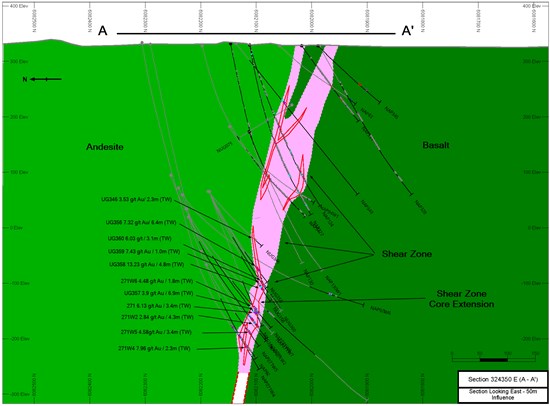 Jennifer Boyle, Chief Executive Officer, notes: “We believe Tartan Lake represents an outstanding exploration opportunity. It is located in an established, stable, mining jurisdiction, is road accessible and includes a significant amount of historical data that demonstrates the presence of gold mineralization. Similar quartz-carbonate vein hosted gold deposits elsewhere in Canada extend for several kilometres vertically and the mineralization at Tartan is continuous from surface to a depth of 600 metres returning grades that are certainly worth evaluating in greater detail with the gold price currently six times higher than when the mine operations were suspended. Metallurgical studies, largely conducted after the mine had ceased operating, indicate recoveries in excess of 92% are achievable and that a significant portion of that recovery can be obtained utilizing gravity recovery. We believe that targeted exploration at depth may unlock significant potential value for our shareholders and we are currently developing an exploration plan and budget to capture that opportunity.”

Notes: Interval length is measured down hole.
True width is estimated based on current interpretations of the geometry of the mineralization and diamond drill holes and is subject to change as new data is collected. 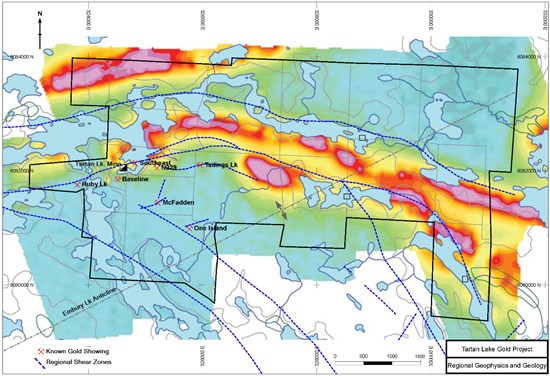 Wes Hanson P.Geo., Director of Satori is the qualified person who has reviewed and approved the contents of this press release. Mr. Hanson, the former Chief Mine Geologist at Tartan Lake, notes the following:

Production statistics originated from published monthly production reports for the period 1987 through 1989. These reports indicate that the Tartan Lake Mine produced 35,814 ounces of gold from 252,527 tonnes of ore that averaged 5.78 g/t gold, which Mr. Hanson verifies as being a true historical representation.

With respect to the reference of the pre-mining mineral reserve estimate, Mr. Hanson notes:

There is no 43-101 compliant Technical Report supporting the historical Kilborn estimate.

Satori’s current mineral resource estimate for the Tartan Lake Project is summarized in the Table below:

ABOUT THE TARTAN LAKE PROJECT

The Tartan Lake Project (2,670 Ha.) is located approximately 10 kilometres northeast of Flin Flon, Manitoba. The project includes the Tartan Lake Mine (1986-1989); which produced 36,000 ounces of gold from 250,000 tonnes of ore feed. Average metallurgical recoveries were 76% resulting in an average feed grade of 5.8 g/t Au delivered to the mill. Remaining infrastructure includes: all season access road, grid connected power supply, mill, mechanical, warehouse and office buildings, tailing impoundment and a 2,100 metre decline and developed underground mining galleries to a depth of 300 metres from surface.

Gold mineralization is associated with anastomosing quartz-carbonate veins hosted in east-west striking, steeply dipping shear zones up to 30 metres in width. The veins, vary from several centimetres to several meters in width and gold grades vary from 1.0 to +100 g/t. Mineralization at the mine is currently drill limited and open at depth.

THIS PRESS RELEASE IS NOT FOR DISTRIBUTION TO U.S. NEWS SERVICES OR FOR DISSEMINATION IN THE UNITED STATES.