Toronto, Ontario- November 8, 2021 – Satori Resources Inc. (TSXV: BUD) (“Satori” or the “Company”) is pleased to report results from three holes, TLSZ21-07, 08, and 09; all of which targeted an interpreted west plunge at the South Zone, at the100% owned Tartan Lake Project, Flin Flon, Manitoba.

The recent drilling targeted an interpreted westerly plunge vector identified in the historical data. TLSZ21-07 and 08 both intersected several metres of quartz-carbonate-tourmaline veining with associated sulphides, averaging 6.73 g/t Au over 5.0 metres and 8.03 g/t over 4.0 metres respectively. Combined with the previously reported intercepts in holes TLSZ21-05 (9.59 g/t Au over 11.75 metres) and TLSZ21-06 (8.79 g/t Au over 4.8 metres), these holes filled in an approximate 100 metre x 100 metre gap in the South Zone drill coverage, averaging 7.28 g/t Au over 7.75 metres (average core interval length). All four holes are 100 to 200 metres from surface.

Jennifer Boyle, Chief Executive Officer commented “The latest results continue to support our belief that the Tartan Lake deposit is drill constrained. Seven of the ten holes Satori has completed to date have returned high grade intercepts over significant widths. Earlier this year, drilling at the Main Zone extended the mineralization over two hundred metres down plunge to the west. These latest results from the South Zone suggest a westerly plunge to higher grade mineralization similar to the Main Zone. Both zones remain open down plunge, offering compelling exploration targets, with the potential to increase the mineral resource of the project through continued drilling. We are also very encouraged by preliminary field observations during reconnaissance mapping and sampling of the McFadden and Sly Fox targets which are located to the south and east of the Main and South Zone targets. Satori field personnel have identified mineralized quartz-carbonate-tourmaline veins and stringer sulphide mineralization similar to what hosts gold mineralization at the Main and South Zone targets. We are very encouraged by the results to date and have delivered on our objectives for our 2021 exploration program, which was outlined prior to drilling. We see significant potential at Tartan Lake, and we look forward to unlocking this potential through careful, systematic exploration.” 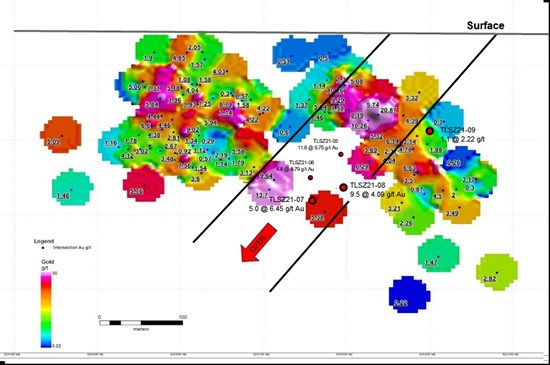 (1) Interval is measured down hole and does not reflect true width.
There is insufficient information to estimate true width at this time.
(2) Previously reported.

The fall ground reconnaissance program was completed in late October. The program consisted of detailed structural mapping around the Main and South Zone deposits, the peninsula to the northeast of the deposit (“McFadden”), showing approximately one kilometre to the southeast, and the Sly Fox, showing approximately three kilometres east. A total of 110 grab samples were collected and submitted for analysis.

The McFadden showing lies along an extensive regional shear zone within a historically stripped area measuring approximately 30 x 50 m. Historical records indicate over 20 historical channel samples were collected, some of which reported highlight anomalous results. Eight historical drill holes are noted at the McFadden showing but no data on these historical holes has been located in the archives. The showing contains extensive quartz-carbonate-tourmaline veining over several metres in width, similar to those observed at the Main and South Zone deposits. As part of this program, an additional 22 channel samples were collected and submitted for analyses and detailed structural mapping of the McFadden showing was completed. A path for future drill access was established in the field in preparation for a follow up drill program.

The Sly Fox showing is located approximately three kilometres east of the Main and South Zone deposits, in an area where mapping indicates regional scale folding along a northeast axis. Low water levels exposed significant outcrop along the shoreline of Batters Lake, exposing extensive zones of shearing with favourable quartz-carbonate-tourmaline veining and sulphide mineralization similar to what is observed at the Main and South Zones. The proximity to the axial plane of the mapped regional structures and associated geophysical anomalies combine to make this new showing highly prospective. Historical maps from data archives indicate anomalous results at several locations. Similar to the McFadden data, details on the historical data at Sly Fox have not yet been located.

All diamond drill holes are NQ diameter (47.6 mm). Drill core is delivered to a secure logging facility at site where it is photographed, logged for geotechnical and geological data and marked up for splitting. Most samples are collected on 1.0 metre intervals, honouring litho-structural contacts with a minimum sample length of 0.3 metres and a maximum sample length of 1.5 metres. All logging, sampling and splitting is performed under the supervision of the P.Geo. managing the drill program. After logging and sample mark up, the core is split with one half of the core sent for analysis and the remaining half stored at site for future reference. Certified Reference Materials and Blanks are inserted into the sample stream at a rate of one blank and one certified standard for every twenty samples.

Samples are shipped in sealed containers to TSL Laboratories in Saskatoon, Saskatchewan for analysis. All samples are analyzed for gold using a 30 gram lead collection fire assay fusion with an atomic adsorption finish. In addition, certain selected samples are assayed using a 36 element multi-acid ICP-ES analysis method. Samples corresponding with any observed visible gold during logging are flagged for Metallic Screen analysis, as are any samples assaying greater than 5.0 g/t Au. All Quality Control results, including the laboratory’s own control samples, are evaluated before public release.

Satori is a Toronto-based mineral exploration and development company whose primary property is the past producing Tartan Lake Gold Mine Project, located in the prolific Flin Flon Greenstone Belt, Manitoba. Satori also holds a 100% interest in the New Delhi Project, an advanced polymetallic gold project in the Sudbury Mining District, Ontario.

The Tartan Lake Project (2,670 Ha.) is located approximately 12 kilometres northeast of Flin Flon, Manitoba, and includes the Tartan Lake Mine (1986-1989); which produced 36,000 ounces of gold from 250,000 tonnes of ore feed. Remaining infrastructure includes: all season access road, grid connected power supply, mill, mechanical, warehouse and office buildings, tailing impoundment and a 2,100 metre decline and developed underground mining galleries to a depth of 300 metres from surface. Gold mineralization is associated with anastomosing quartz-carbonate veins hosted in east-west striking, steeply dipping shear zones up to 30 metres in width. The veins vary from several centimetres to several metres in width and gold grades vary from 1.0 to +100 g/t. Mineralization at the mine is currently drill limited and open at depth.