Satori Resources Inc. holds a 100% interest (subject to an NSR) in the Tartan Lake Gold Mine Project, which produced 47,000 ounces of gold between 1987 and 1989. The property is approximately 2,670 hectares in area and consists of 20 mineral claims. The Project consists of a 450 mt/day processing plant, related infrastructure, and a decline providing access to developed mining blocks within the Main and South Zones to a vertical depth of 320 metres. The property is road accessible from the nearby mining town of Flin Flon and is hydro connected. An independent NI 43-101 resource estimate was recently completed, with an indicated mineral resource of 1,180,000 tonnes @ 6.32 g/tonne gold (240,000 ounces) and an additional inferred mineral resource of 240,000 tonnes @ 4.89g/tonne gold (37,000 ounces), using a 3.0 g/t cut-off.

The Tartan Lake gold mining property was operated by Granges Inc. when it produced 47,000 ounces (~36,000 ounces recovered) of gold between 1987 and 1989 from portions of the Main Zone and the South Zone. The Tartan Lake process plant was initially designed and constructed as a 250t/d concentrator to process gold bearing ore with a head grade of 12g/t. The Mill entered commercial production in 1987, with throughput increased to 450t/d in 1988. During 1989, a re-grind mill was added to the back-end of the circuit. In November 1989 the Mill ceased production due to low gold prices and a significant mechanical failure, and was placed into care and maintenance. When the mine started production the gold price was ~ $460/ounce and when production ceased in November 1989, the gold price was about $375 per ounce.

The Property is located in the western part of the Flin Flon greenstone belt in northwestern Manitoba, approximately 12 kilometres northeast of the town of Flin Flon, and includes 10 documented mineral occurrences within the Property boundaries – the exposed portion of which has an apparent elongate easterly trend, approximately 250 kilometres long by 75 kilometres wide. The Records of exploration on the Tartan Lake site date to the 1920’s and up to 1980 work included trenching, diamond drilling, and small test mining batches by a number of exploration companies. Exploration by previous operators identified several shear related gold mineral occurrences within the Tartan Lake property boundaries. 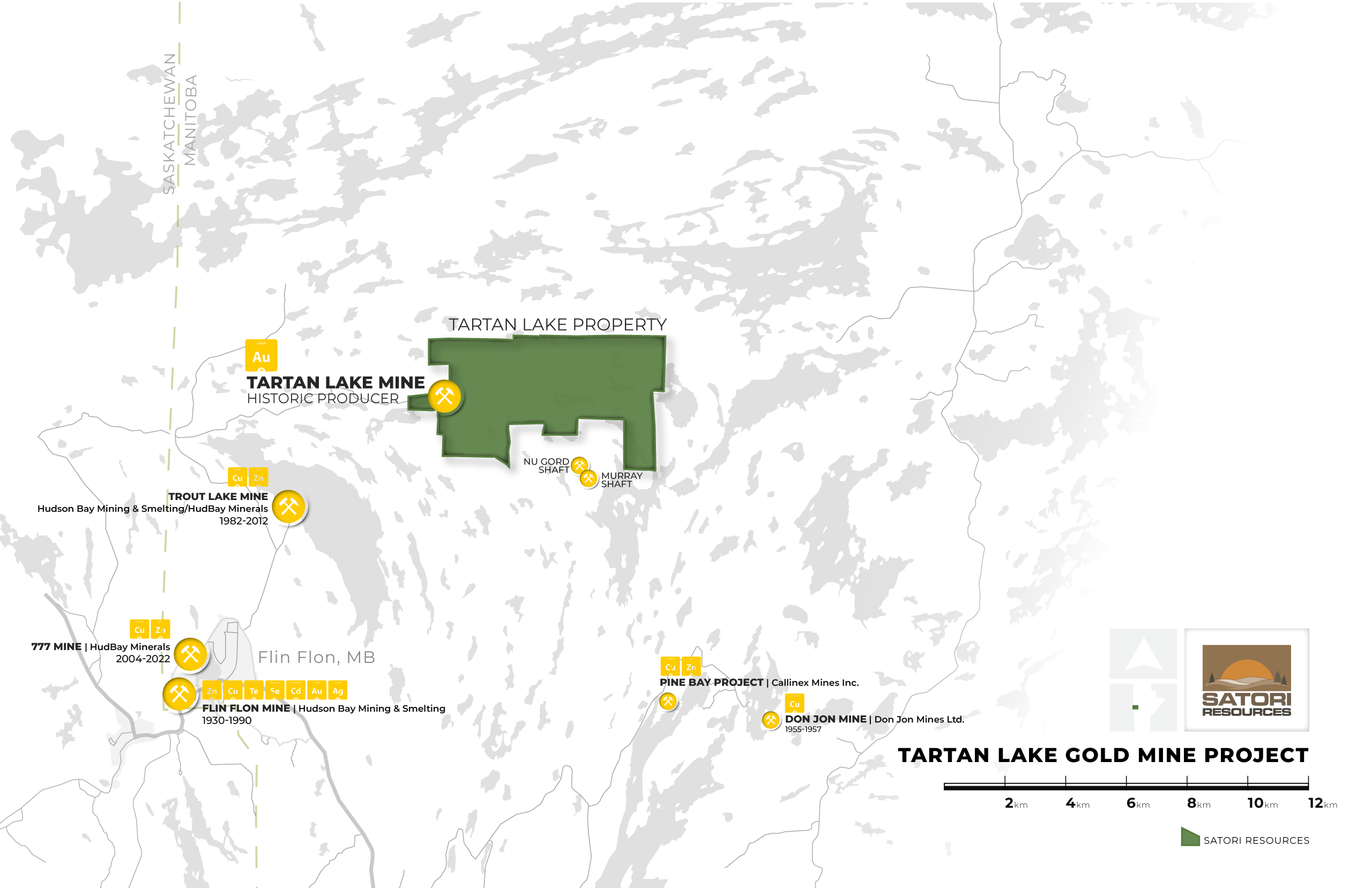 When the mine went into production, mineable reserves were estimated, using Medsystem software, to be about 620,000 tonnes grading 8.5 g/t. Road access, underground access by decline, and concentrator construction proceeded in 1986. The mine is trackless. It is accessed by a 4.3m high by 4.54m wide decline. The decline ramp has a slope of 15%. Development is down to about 300 metres with developed tonnage on the 90, 154, 200, 260 and 304 levels. Stopes were developed from a series of crosscuts off of the decline. Stoping was by mechanized undercut and fill. An undercut was developed along the strike of the deposit. Ore was mined using a 1- or 2- boom jumbo drills and was mucked using scoop trams. Thirty-two tonne trucks hauled ore from the underground ore pass system to the surface stockpile. The mine began with a production capacity of 87,500 tonnes per year (350 t/d, 250 day year) and when it ceased production it had a capacity of 450 t/day. The mill employed a combination of gravity separation, flotation and cyanide leaching (Merrill-Crowe Process). When the mine ceased production historical reserves were estimated to be about 375,000 tonnes grading 6.27 g/t (top cut 30 g/t, cut-off grade 4.5 g/t, minimum mining width 2.6m with 0.35m of dilution on either side of the structure). The estimate is historical and not NI43-101 compliant.

The gold mineralization is hosted by steeply dipping east-west shear zones with a trend and plunge about 70° to the northwest. The Tartan Lake Property is located in the Flin Flon greenstone belt, an easterly trending Lower Paleozoic volcanic arc complex. The complex is a collage of tectono-stratigraphic assemblages that was tectonically assembled at an early stage in the evolution of the Paleoproterozoic Trans-Hudson Orogen. The local geology has a generally east-west fabric. To the north of the mine, across Tartan lake is a unit of felsic to intermediate lapilli-bomb volcanic tuffs. South of this unit and still north of the Mine are intermediate ash-crystal tuffs and segments of gabbroic rocks. Shearing intensity increases near the Main Zone through to the Baseline Zone. Shearing is east-west with the rock on the north side of the shear being transported to the west.